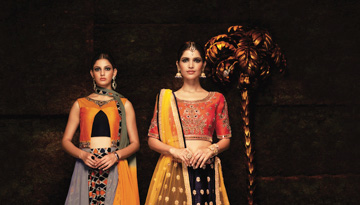 Ghagras are worn by girls and women in the states of Bihar, Gujarat, Haryana, Rajasthan and Uttar Pradesh, while lehengas are a more modern take on ghagras. The latter is most commonly worn during weddings, sangeets and festivals while the humble ghagra is used as daily wear by traditional women in India.

While having more similarities than distinct features, lehengas and ghagras have the following minor differences: